Having received a Sphero robotic ball (made by Orbotix) as a christmas present from my wife (yes, she is truly amazing) I went into a frenzy of coding over the holidays. Robotics have always interested me but I never got around to experimenting with it before now.

For those of you looking to tinker a bit with robotics I cannot recommend this little gadget highly enough.  The Sphero is a hermetically sealed spherical shell of polycarbonate crammed full of robotic goodness. Built in sensors include an accelerometer, a compass, and a gyroscope. All communication with the Sphero is performed via Bluetooth through the sealed shell which makes sense as it is intended to be used outdoors and even in water (it floats). The device is thoroughly documented which allows for some very satisfying hacking activity, something which seems to be encouraged by Orbotix, the company behind this little marvel. 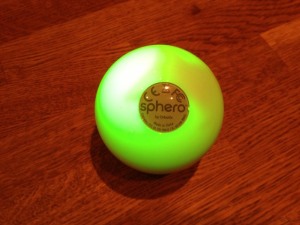 Driving the Sphero around the livingroom using a smartphone for a controller is fun and extremely entertaining for adults, offspring and felines alike, although, for a device promoted as a Robot, it started to feel more and more like a radio controlled ball. A true robot is supposed to scurry around the place and do stuff without me having to frantically wave my phone around. After searching the developer forums for a while I found that there is actually an implementation of BASIC (orbBasic) which will run on the Sphero and allow it to exhibit more autonomy. My first goal became to find a way to upload an orbBasic program to the Sphero from a .NET application and run it.

Sadly the developer SDK’s are only available for mobile platforms (namely Android and iOS) for now. Luckily the low-level documentation for the Sphero is excellent and allowed me to ping the device via Bluetooth from a .NET application and receive a reply within an hour or so of tinkering.

After some additional work and pooring over the documentation I now have a fairly decent (if hurried) experimental framework SpheroNET v0.1 up and running. Please note that it IS experimental and is likely to throw exceptions the moment you look at it funny. The solution includes a console application for testing but nothing else.

First we need to find some devices to connect to.

Once we have retrieved a list of available devices and selected your sphero from among them we need to connect to it. Note that we have to allow for a number of retries. This is because the connection process would otherwise, for unknown reasons, frequently fail. A succesful connection returns a NetworkStream which you will be able to write to and read from.

Data sent to the Sphero needs to be formatted into binary sequences i.e. packets that it can understand. There are three types of packets; command, response and asynchronous packets. The format for all three is quite similar which is why I chose to base all packets on a single abstract base class. The primary function of this class is to calculate and update the packet checksum as well as to allow access to the two fields (SOP1 and SOP2) common to all three packet types.

Much of what you might want to do with the Sphero can be accomplished by simply sending properly formatted command packets. The SpheroCommandPacket class below should be able to produce any command described in the API documentation if configured correctly through its constructor.

Obtaining properly formatted command packets is a simple matter of implementing a factory class for that purpose.

Below we send the assembled packet over the NetworkStream. Notice how we also assign a sequence number (one byte) to the packet. This is because the sequence number is echoed in any resulting response packets which will hopefully allow you to figure out which response belongs to which command. How you go about relating asynchronous packages from the Sphero to the commands that triggered them is another question for which I have no definitive answer at the moment. Asynchronous packets may be sent as a result of commands or may be sent as a result of some internal trigger in the Sphero (for example just before it goes asleep).

Sending an orbBasic program to the Sphero is now quite straightforward. The program below, once sent and executed, will make the Sphero glow a steady green as long as it is not disturbed. Once a preset acceleration threshold is reached it will pulse red for about 10 seconds. This is, admittedly, not a very exciting program but it is a good start.

For a fuller picture of how you go about receiving and classifying incoming packages (response or async) please refer to the full SpheroNET source code.

For the future I have a number of improvements planned. Firstly I will spend some more time writing orbBasic code to make the Sphero behave like the robot it is, much to the delight, I would guess, of children and cats alike. Secondly all the commands listed in the API documentation should be implemented. An intuitive way of relating sent command packages with their resulting response packets (and asynchronous packets when possible) should also be found.

As always any feedback is welcome.

13 thoughts on “Balls out fun with the Sphero and .NET”

This site uses Akismet to reduce spam. Learn how your comment data is processed.